Get fresh music recommendations delivered to your inbox every Friday.

The Believers: a musical tale of disillusionment 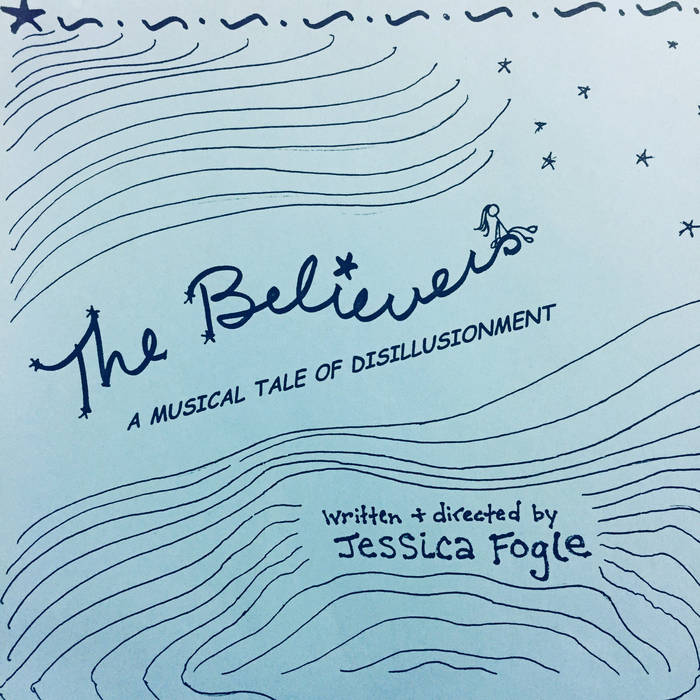 BACKSTORY:
When I was younger, I went to a private school (Lawrence University / Conservatory of Music)...that lured me with their AMAZING "Create Your Own Major" Program. Also with an IDEA Fellowship, which funded a semester of arts study abroad (London). The catch with the create-your-own-major program is that you had to attend the school for TWO YEARS and THEN you could submit a proposal. All I wanted in the whole world was a B.A. in Songwriting. I'd won THREE Statewide songwriting awards (5th-7th grades), I knew who I was, despite being a hyper-intense A student across the board, all I wanted to be was a singer-songwriter. Since I was in Elementary School.

Well, I'm sure you know where I'm going with this...they rejected my proposal. I was heartbroken. Considered transferring to University of Wisconsin - Madison, where my brother and friend went. But that wasn't right either, wouldn't solve the problem. The reason they gave, despite my thorough proposal (including coursework in Psychology, Poetry, Philosophy, and Music - with detailed descriptions of each requirement), was that my current trajectory was more impressive (?!?) or made more sense (?!?)...

Basically, my current trajectory was a double major and a minor - B.A. in Music (piano performance emphasis) and B.A. in Theatre (dramatic literature emphasis), and a minor in English.

And honestly, maybe this is the first time I'm saying this, or even THINKING it...maybe this was all meant to be. Maybe I was supposed to write this musical. Maybe I was supposed to go to NYC for grad school in Musical Theatre Writing (made no sense years later, when I realized I didn't even love musicals - not like my peers, not enough to be in debt for 30 years for that 2 year grad program investment), which I only went to because...

Tongue-in-cheek, typical defiant fashion at authority, I was annoyed soon after being hurt...and decided that if I was going to do 2 majors and a minor, that I'd just do ONE project to fulfill ALL the senior projects. I'd write and direct a musical to satisfy the Theatre major / English minor, and I'd perform the original piano score to fulfill the Music major... so it was meant as a sort of F U. But also I got into it haha.

So I love this musical. It's flawed. It's not written by someone who loves ALL musicals, more that I loved certain campy / stylized small-cast shows like The Fantasticks and Stop the World I Want to Get Off...I'd music directed about 5 shows by the time I wrote this, and sort of paid tribute to my favorite silly bits and comedic stylings (of both writers AND directors/choreographers I'd loved)...I dunno. I'm glad I wrote it. I'm not glad one of my professors pushed me HARD to "not pass up" the opportunity to get my MFA in Musical Theatre Writing...like, $200,000 and it was a new program (10 years old at the time) and it didn't lead to connections or career paths for most of us who went there. Nathan Tysen and a few others, I suppose (Rachel Sheinken, Carmel Dean...) it's cool to know these people who are working regularly in NYC now. And I went to school with them, we were all young and starry-eyed together. I got to find out that William Finn loved my music, and how much heart it had. And Michael John LaChiusa did NOT like my music, called it "too Disney." Which I learned was derogatory. I learned I end "on the 1" (scale degree) "too much" - and other annoying tidbits in my brain that hampered my writing for YEARS. I learned that if you are kind you'll be in demand and then when it comes time to pair people, the fussiest writers get to write solo projects while you are forced to collaborate on an idea you don't even love (made it work, but again, $200,000 ?!? I did love it in the end, but it was challenging to be sure both our visions came through) I learned that creative fields are very difficult if not near impossible to succeed in, and that being in school for something creative is a HUGE luxury.

Anyway, it's a weird moment in time...I lived there, and studied there, THROUGH 9/11 (that was the 1/2way point of my education). I pay for those two years, $475/month, every month since. Well except a couple years I deferred the loan because DEAR GOD how am I even paying it as a starving artist piano teacher singer songwriter with a few Patreon followers?!? This whole path is crazy. We are sold hope. Hope is another way of saying "probably a lie" or "longshot"...I don't know the solution. Like I said, if I'm honest, I love this musical. I like my weird credentials, I like that I have too many of them, and I don't even mind that I barely make much money because I'm still just playing catch up on the ridiculous number of projects and albums and musicals and stories and ideas and TedTalks and Ukulele Talks and Piano Feelings and Casio Truths (j/k I don't remember what those videos/podcasts are called haha!) I have so much work I'm behind on...work no one asked me to do, work that's helping me feel more like myself, in this wild lottery world.

Basically, I've wanted to score this for a long time (sorry Kevin) - and when I realized that no matter how much I wanted to have it done, it wasn't my calling to be the one to do it, I have WAY too many callings...I decided this was the next best thing: PUT UP THE CAST RECORDING (lifted from a video, at the LU production). Someone can transcribe it someday? If they want? Or maybe I'll make karaoke tracks someday? I'd love to see this remounted...I might even do a staged reading next summer, with my friend David. I dunno.

Anyway, I hope all your dreams come true, and if not -which is most likely - I hope you can find meaning, or fun, or some sort of playful spirit - in sorting thru what matters to you, and pursuing / nurturing that, while letting the rest go.

THE BELIEVERS: A MUSICAL TALE OF DISILLUSIONMENT
written by Jessica Fogle
(book/lyrics/music)

ACT I:
before the fall

ACT II:
after the fall

(+note to the LU cast: please let me know if you don't mind me listing your names+specific roles here as a performer/singer/actor...I left them in one bunch like this, in case anyone would prefer to be a little more anonymous) And huge gratitude to all who attended any of these shows, and/or gave words of encouragement (Kent Hayes, Peter Bennet, you both spring to mind :). THANK YOU!!! <3

Bandcamp Daily  your guide to the world of Bandcamp

Nightmares on Wax and Bremer McCoy stop by with their sublime new LPs.